I'm really enjoying putting together these Friday posts as I get to think about Florence all over again! When we arrived late on the Tuesday evening we had a marvellous time re-acquainting ourselves with the streets and taking photographs late into the night. Fortunately, we'd arranged to have breakfast at 9am and dedicated our first morning to mooching. The breakfasts themselves are worth a mention as every morning we had a tray packed full of food delivered to our room and I love that it is perfectly acceptable to eat biscuits for breakfast! 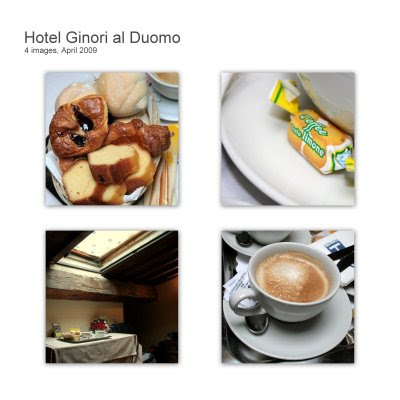 Following our first breakfast we set out to find the Giardino dei Semplici and we did, but it is closed on a Wednesday! We were glad to have found it and even more enthusiastic about visiting after looking through the iron railings to see the garden. More of that later! The day was getting progressively warmer and so we did indeed mooch! Wandered around found some places we'd earmarked to see and spent a fabulous couple of hours in the Piazza della Santissima Annunziata, watching, eating lunch, photographing and sketching. The Piazza is bordered by the Basilica della Santissima Annunziata, the Spedale degli Innocenti (hospital featuring a portico by Brunelleschi), the Confraternità dei Servi di Maria and Ammanati's Palazzo Riccardi-Manelli.

The photographs from this first day are the first I have processed and made available in my revamped Artfire studio! So far I have added a series of black and white images taken from within the Piazza featuring a contrasting range of people, only one of whom spotted me photographing them and as he was the only one who could be seen as a central focus of the image, a simple smile from me and a nod from him suggested he was happy enough. Reminds me of some handy tips I read a while back on the subject of photographing people: I tend to only ask if the person is going to be the main focus of the image, however, for these street images I did not ask any of the people but kept a distance and remained as unobtrusive as possible. No white handkerchief or black tape used but there are lots of people out and about with cameras in Florence so nobody seems to mind. 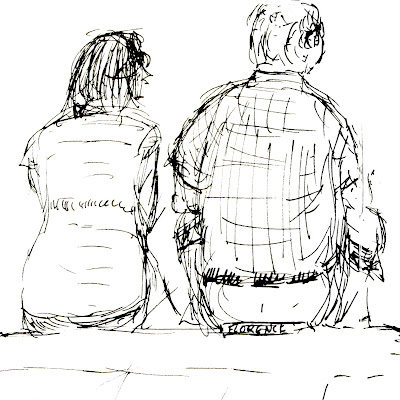 While we were sitting sketching, a couple sat down on the steps in front of us and I loved the fact that he sat on his Florence guide book! Since coming home I've been reading A Room with a View and on looking at this sketch again, can't help thinking about the iconic Baedeker:
Tears of indignation came to Lucy's eyes partly because Miss
Lavish had jilted her, partly because she had taken her Baedeker.
How could she find her way home? How could she find her way about
in Santa Croce? Her first morning was ruined, and she might never
be in Florence again. A few minutes ago she had been all high
spirits, talking as a woman of culture, and half persuading
herself that she was full of originality. Now she entered the
church depressed and humiliated, not even able to remember
whether it was built by the Franciscans or the Dominicans.
Of course, it must be a wonderful building. But how like a barn!
And how very cold! Of course, it contained frescoes by Giotto, in
the presence of whose tactile values she was capable of feeling
what was proper. But who was to tell her which they were? She
walked about disdainfully, unwilling to be enthusiastic over
monuments of uncertain authorship or date. There was no one even
to tell her which, of all the sepulchral slabs that paved the
nave and transepts, was the one that was really beautiful, the
one that had been most praised by Mr. Ruskin.